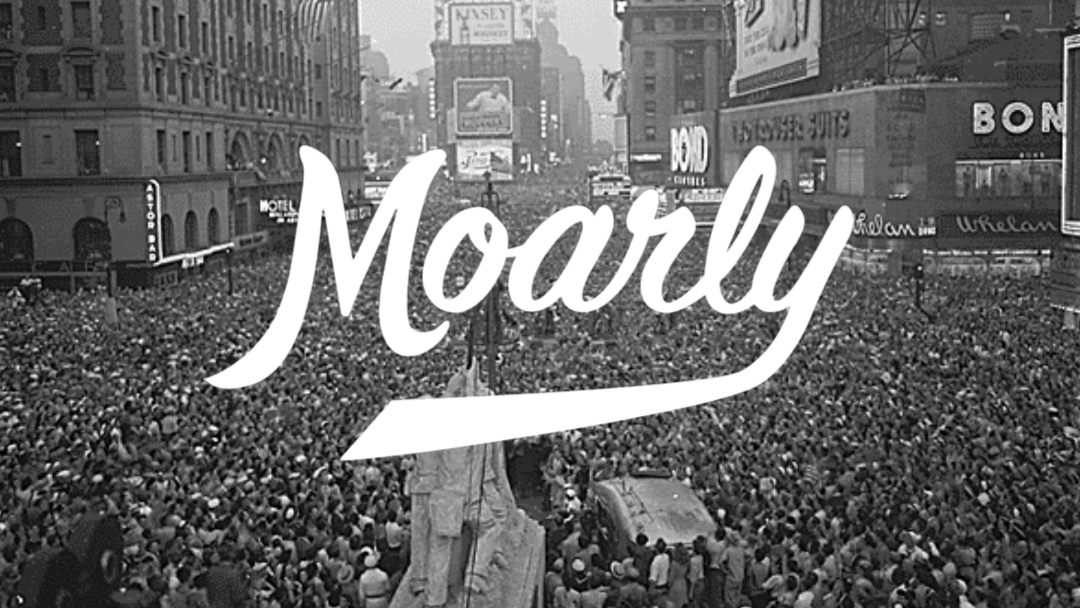 At first glance, the looping Moarly Creative logo might look like just another script logo (think Instagram or the Kansas City Royals). While there definitely are some similarities, there is much more to our logo than meets the eye.

The story starts on August 14, 1945. After years of fighting each other in World War II, Japan surrendered to the United States — effectively bringing an end to the war. When news of the surrender broke, celebrations started all over the world. It’s a day that is still known as Victory over Japan Day or more simply V-J Day.

QUICK NOTE: Japan agreed to surrender on August 15, 1945 (Japan Standard Time), but due to the time difference, parties started on August 14 in the United States. Victory over Japan Day is still honored in some countries on August 15, but V-J Day is now observed on September 2 in the U.S. That’s the day Japan formally signed the terms of surrender.

People filled the streets from San Francisco to Sydney and everywhere in between. There was kissing, drinking and debauchery. It was a true celebration that reverberated around the globe. And for good reason: the world was finally at peace.

The focus of this story turns to the streets of Chicago. That’s where my grandpa Wally Stagg was celebrating V-J Day with his buddies and an estimated crowd of 500,000 people. And like many others, the party got the best of him. So much so, that he added a mark to his body that day that stayed with him for the rest of his life.

I heard the story from Wally too many times to count. He got so drunk with his friends on V-J Day that they decided to get tattoos. Wally’s tattoo was simple. It was his name written in cursive on top of his left forearm. Aside from Wally’s big personality and the smell of his cologne, it’s one of the things about him that I will never forget. And it always left me wondering what the celebration must have been like for him that day.

Unfortunately, Wally passed away in early 2017. And the tattoo went away with him. But not long after my grandpa’s death, I was shown a photo that I had never seen before. It was Wally with his friends, boozed up on V-J Day. The three are posing for a picture, bottles in hand and behind bars in a staged Chicago city jail (no, they weren’t actually arrested — or at least I don’t think they were). In this case, a picture is truly worth a thousand words.

Although Wally and his tattoo are no longer with us, the story continues. Fast forward to August 14, 2017. It was the first official day of business for Moarly Creative, and it marked 72 years to the day when Wally got tattooed with his buddies in Chicago. The world surely changed a lot in that time but there is still one similarity — the mark — Wally’s tattoo and the Moarly Creative logo.

There are not many people I look up to in this world more than my grandpa. He could tell a story like it was nobody’s business. And speaking of business, he ran a few of his own. I miss hearing his voice, smelling his cologne and seeing his tattoo. But to me, a piece of him still lives on right here at Moarly Creative. And you can see that in every loop of our logo and in every single story we tell.